Could Technology Save Notre-Dame?

This story was published in partnership with Ulyces.co.

Could it be, as Emmanuel Macron promised, that Notre-Dame could be rebuilt in five years thanks to technology?

Frozen in the fading light of 15 April, the deserted inside of the cathedral contrasts starkly with the humming agitation that surrounds it. Wooden benches glow in the dark, flaming embers flying from the Notre-Dame de Paris’ rooftop. More than 10 meters up, a gaping hole opens in the 13th century frame, and soon, the cathedral’s iconic spire and rooster collapse in front of thousands of red-eyed Parisians.

Unlike fire crews in other countries, France’s Sapeurs-pompiers fight the fire from inside, hoping to minimize the damage. The technique allows them to save precious treasures from inside Notre-Dame, but it quickly proves to be dangerous. A little more than 20 hours after the fire broke out, the spire cracks in two and falls slow into the void, taking with it the flames that had consumed it for several long minutes. The firefighters get out of the cathedral, deciding to leave it to the Colossus. The 500-kilo robot enters the sacred space, illuminating the nave with its sharp white light and firing its canon toward the ceiling, toward the fire. 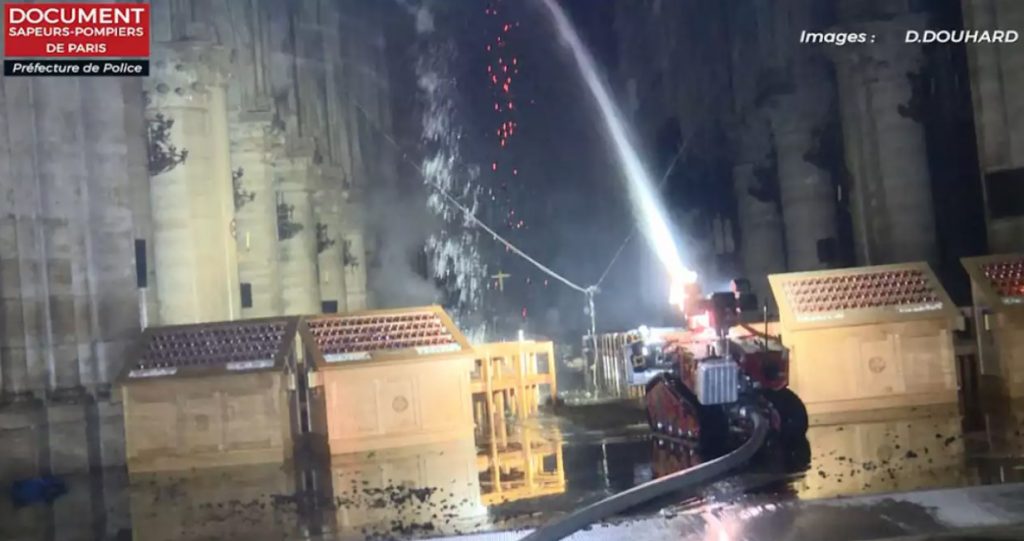 Colossus on the field

The machine, created by Shark Robotics, a French company based in La Rochelle, is remote controlled by firefighters. “It’s letting us extinguish and lower the temperature of the nave,” explains Gabriel Plus, the firefighters’ spokesperson, to the media gathered outside the cathedral. This valuable technology would help the 400 firefighters dispatched on site overcome the fire in the middle of the night. The losses would be colossal but the belfries saved, as would be most of the stained-glass windows.

The fire was not even out when Emmanuel Macron, on the square in front of Notre-Dame, declared that France would “call on the greatest talents to rebuild the cathedral.” The next day, as the country’s biggest fortunes began donating hundreds of millions of euros, the president promised that this icon of French history would be rebuilt “even more beautifully, in five years.” It was a bold statement in the eyes of observers, some of whom, on the night of the catastrophe, predicted the renovations would take 20-30 years.

“Using new technologies, the construction can be accelerated, and the work won’t take as long as I’ve heard,” says Denis Lachaud, CEO of Life 3D, the company that 3D scanned the cathedral for renovation work. “I’m more optimistic, because if we’re willing to rebuild it identically, we’ll be able to use the exact dimensions of the beams in the attic, draw most of the elements, and produce them fairly quickly,” he says. 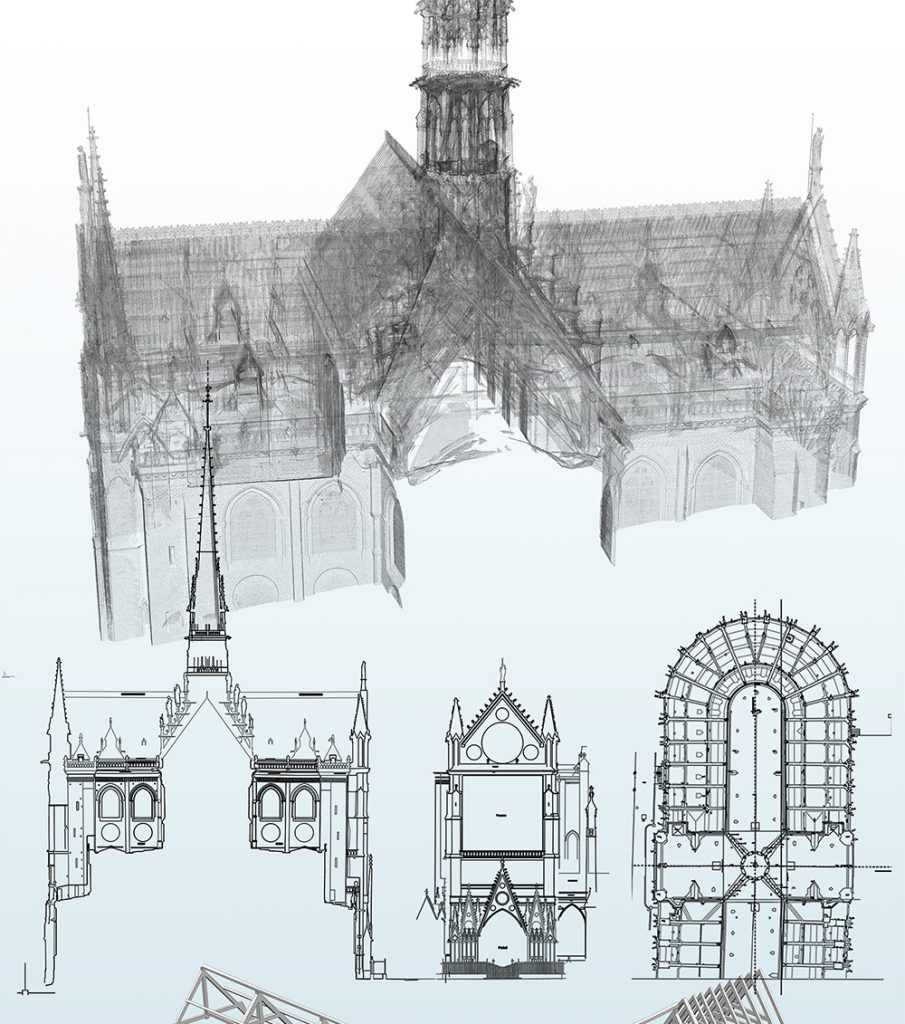 “There’s a common goal to rebuild Notre-Dame with as few delays as possible, and for that reason it’ll be impossible to avoid using technology,” says Giacomo Massari, cofounder of Tor Art. The Italian company, which unites robotics, digitalization, design and sculpture, is known for reviving Syria’s Arc of Palmyra monument in 2016, which was destroyed by ISIS. “New technologies are going to revolutionize the world of construction for several reasons, whether that’s cost, security, or speed of execution. Using them will certainly help rebuild Notre-Dame faster, and even to rebuild it better,” he says.

But despite all the technology at its feet, Notre-Dame, is a building mostly dating to the Middle Ages, which therefore must be treated with care after the traumatic burning. “The construction is going to take a long time, because there will be consolidation phases with the building, a verification of the structure, and they’ll have to build all the facades. They’ll also have to support the cathedral, because it’s been greatly weakened by the fire, and its stability has been significantly undermined,” Lachaud says.

Although it took 182 years to build Notre-Dame, new technologies should greatly accelerate its next resurrection. Equipped with a 3D Leica P50 scanner, Lachaud began combing the cathedral in 2016 for Le Bras Frères, the company managing – until the fire – the cathedral’s renovation. “We made a scan of the exterior, attic and interior of the spire to calculate the scaffolding, but also to anticipate the movement of materials or the replacement of beams,” the Life 3D CEO says. 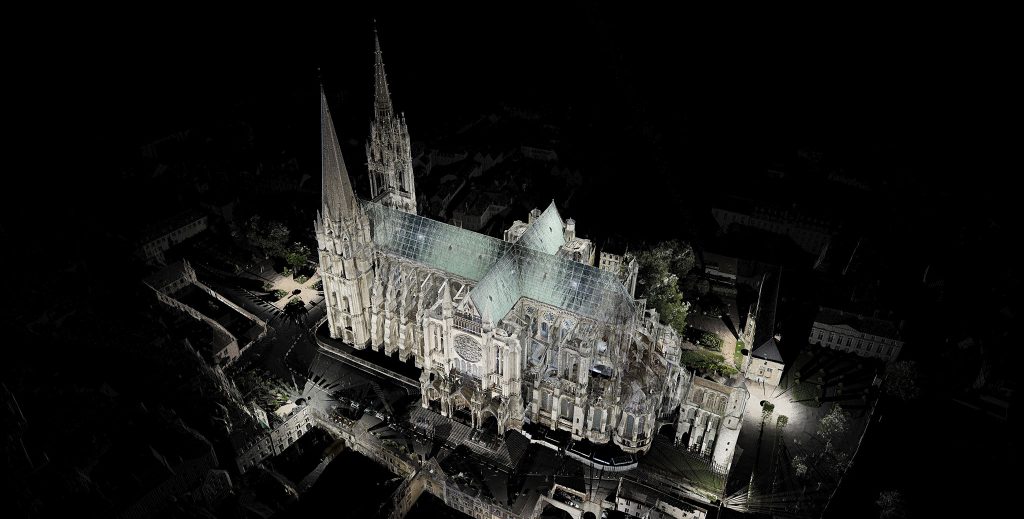 A laser scanning of Notre-Dame
Credits: Andrew TallonIt’s a type of craftsmanship that “allows us to capture points with millimetric precision for a kilometer, depending on the type of material and its color.” As a result, we now have highly specific plans that will be useable to rebuild an identical cathedral. “The density of points at the level of facades, roofs, carpentry and stained glass ranges from 2 to 5 millimeters. The spire was very dark when I worked on it, so we have a point every one or two centimeters on the highest part,” Lachaud says, assuring that “this highly specific and reliable data” will speed up the rebirth of Notre-Dame.

The specialist is already imagining that BIM models (Building Information Modeling) will be able to be used in order to allow future builders to progress quickly to execution phases. This process, based on an intelligent model, lets architecture, engineering and construction professionals create digital models in 3D based on physical data characteristics.

But construction professionals aren’t the only ones that have immortalized Notre-Dame from every angle. Chloé Rochereuil, journalist and cofounder of VR documentary company Targo, spent three months in the cathedral for a report broadcast in January 2019. While she couldn’t have foreseen the tragedy to come, Rochereuil now sees a new use for her documentary. “We wanted to allow people to discover this place, and we had access to areas that weren’t normally shown to the public, that is, part of the ceilings, the interior of the steeples and the sacristy,” she says.

“VR allows us to understand incredible volumes of Notre-Dame, and using it now makes sense. I haven’t put the VR headset back on to see the report again, but I’m sure the emotion will be there, even if nothing will ever be as beautiful as the real thing. It’s a precious document we have,” she says, adding that she hasn’t yet been contacted for the recovery of her images. 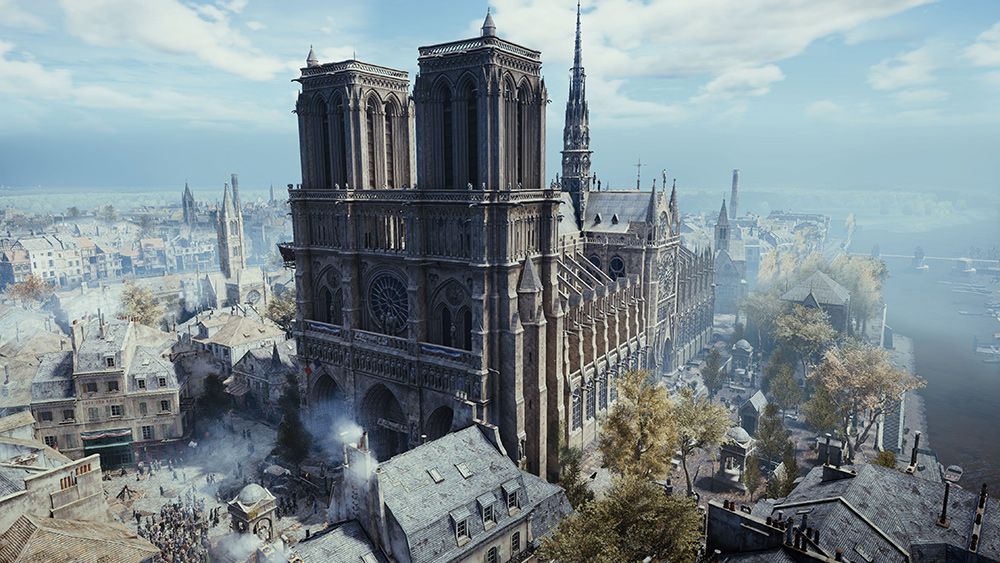 Artistic director Caroline Miousse scrutinized Notre-Dame from every angle for two years to rebuild it, realer than real, for the game Assassin’s Creed Unity, released in 2014. Just as Rochereuil’s documentary throws spectators into the pre-fire Notre-Dame, Ubisoft’s game transports gamers to Paris during the Revolution. The game has now become a real historical testimony, another potential tool for the prelude to reconstruction.

After the design phase comes the real construction, and the use of 3D printing enters the debate. For Giacomo Massari, “we’ll have to use 3D printers, CNC (computer numerical control) machines, and 3D scanners.” The Notre-Dame’s frame was nicknamed The Forest for a reason: it took 21 hectares of oak, some up to 400 years old, to build it. Each beam comes from a different tree, and this would be simply impossible to do today. “In our country, we no longer have trees the size of the ones cut down in the 13th century that constitute what one would call a ‘virgin forest,’” says Bertrand de Feydeau, vice president of the Fondation du Patrimoine.

According to him, “we’ll have to use new technologies that will give the cathedral the appearance we love, but won’t allow this mysterious visit to the great forest of the cathedral.” For his part, Lauchaud doesn’t believe 3D printing should be used for structural elements, which he says will be rebuilt “using classic construction.” Still, he sees this technology playing a role in the project in “the moldings, the ornamental elements of facades, which have been badly damaged or destroyed by the fire.”

3D scanners, virtual reproductions and VR images of Notre-Dame, which some claim are far removed from their primary purpose, could be used for the cathedral’s benefit. The new technologies are increasingly making their case as an ideal solution for the conservation and restoration of historical monuments. “It’s essential to use these kinds of tools in the conservation of our buildings. We’ve already scanned the Élysée, the châteaux de Compiègne, St-Germain-en-Laye and Fontainebleau, the Arc de Triomphe, etc. We know now that if there’s even the slightest problem with one of these buildings, we have an exhaustible and reliable source of data that will allow us to rebuild it identically,” Lachaud says. 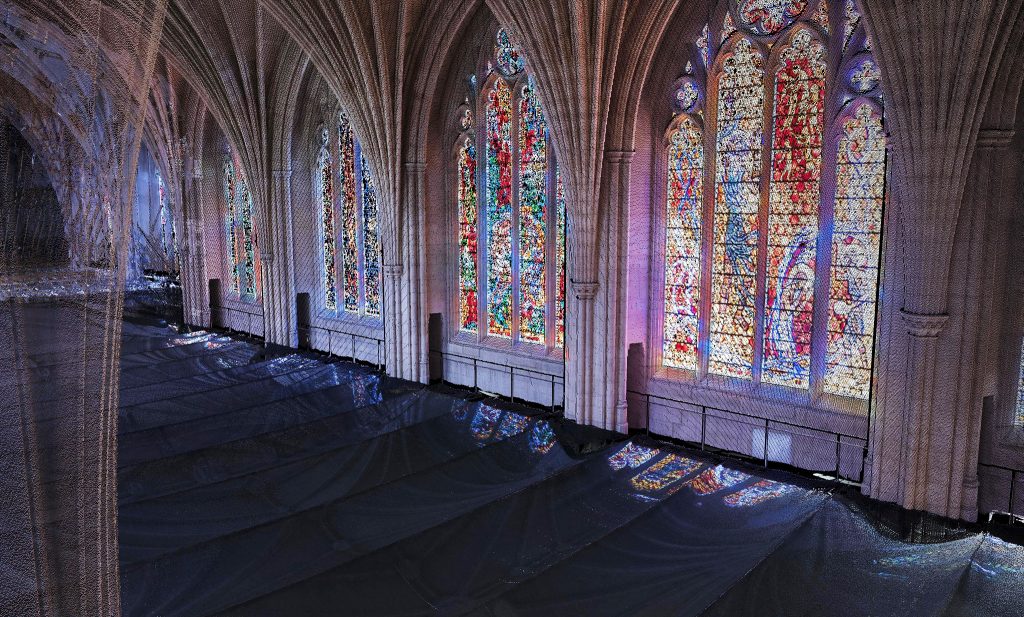 Laser mapping of the interior of Notre-Dame.
Credits: Andrew Tallon

He admires Tor Art’s work in Syria, “the measurements for work done there being done by photogrammetry and not by lasergrammetry,” as in the case of Notre-Dame. Just like tourists systematically saving their vacation photos on hard drives, the technology will allow us to secure the future of historic and cultural heritage, while immortalizing the architecture of each building. In addition to being carved in marble and rock, they’ll take on a digital existence, which will allow them to be reborn or restored in years to come.

For experts, these 3D digitalizations of buildings and works of art should become systematic. As Giacomo Massari powerlessly witnessed images of the destruction of Syrian heritage, he felt compelled to scan the Arc of Palmyra in a last-ditch rescue reflex. To recreate such an edifice, “we first have to recover the 3D data, which should of course be acquired before the damaging event occurs, so they’ll be as faithful as possible to the original,” he says.

“Then comes the choice of material. In the case of the Arc of Palmyra, we chose an Egyptian stone, because we didn’t have access to Syrian marble at that time. Then there’s the engineering work of the pieces, which you have to divide depending on the best adjustment to the remaining stone. You also have to create an appropriate construction system in order to facilitate the installation, and to improve the strength and stability of the original work,” Massari says. 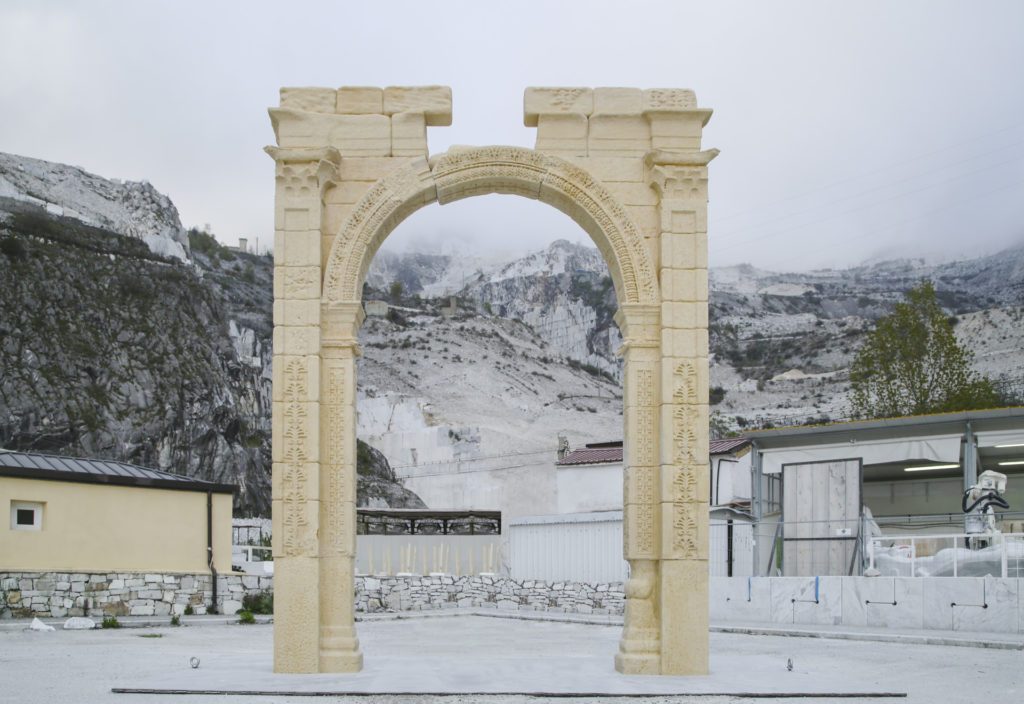 A small scale reproduction of the Arc
Credits: Tor Art

To complete the modern version of the monumental Arc, Tor Art called in the expertise of an “anthropomorphic robot, to cut the pieces in full respect to the initial shape.” From design to final construction, these new technologies are, according to him, the best solution. Still, there’s a long way to go before they’re fully integrated in construction sites.

“We’re in an acceptance phase among experts who have decision-making power. Unfortunately, it’ll still be some time before these technologies become the ultimate solution, because I see a lot of differences of point of view on the subject,” Massari says. “There’s a generational challenge concerning the approach to renovation and reconstruction.” But exactly what does one generation represent in the full scope of Notre-Dame’s story?

Will the truth survive the manipulation of images?