The ESA plans to use make the moon inhabitable by using lunar soil to build a sustainable life.

This story is published in partnership with Ulyces.co.

Fifty years after Neil Armstrong’s “one small step,” humanity is taking new steps toward the moon. The European Space Agency (ESA) and ArianeGroup envision “an autonomous human presence” on the surface of Earth’s satellite by 2030. In January 2019, the two giants announced the signing of a contract to study the possibility of a mission before 2025.

In the first step, the material required to build a robot camp will be flown up on board the Ariane 64 rocket, in order to collect and transform the loose rock covering the surface of the moon. The plan is to take this bed of regolith and turn it into water, oxygen, carbon, and even into antiradiation construction material. David Parker, the ESA’s director of human and robotic exploration, describes how Europe is expecting to install new offices on the moon in the next 11 years.

What are you going to be doing on the moon?

By drilling into the surface, we want to collect regolith to see how we can convert it into water, oxygen, and construction materials. On the moon, the earth isn’t really earth, since it doesn’t contain any organic material. You basically just find regolith on the surface. Over the last 50 years, we’ve identified traces of water loosely linked to this material, mostly at the south pole. This area is permanently in shadow, which means that the less the sun reaches the moon’s surface, the more you find water and regolith.

What benefit is there from collecting regolith?

First off, it allows us to know more about the beginnings of our solar system. For example, the dispersal of water before it reached Earth should become clearer. We’re somewhat certain that the moon was created when a giant object about the size of a planet collided with the primitive Earth, which at the time was only a billion years old. In other words, it was born from debris ejected by the primitive Earth and reformed in orbit. There’s a good chance we’ll find minerals that are vestiges of that destructive collision. Recently, we reexamined some rocks brought to Earth by the Apollo program (1961-1975), and we found that one of them came from here. By going to the moon, we hope to learn more about Earth’s first moments.

But there’s another reason, too. The materials found on the surface of our satellite offer the possibility of envisioning a future there. For the time being, we have to bring everything – water, oxygen and construction materials – if we want to settle permanently on the moon. But regolith could change the game. Is it possible to transform it into construction material? To extract potable water from it, and transform that water into breathable oxygen? Or even to use it as fuel for our rockets? The study Ariane Group will be leading is part of a long-term vision that will answer these questions as developing technologies make sustainable exploration possible. 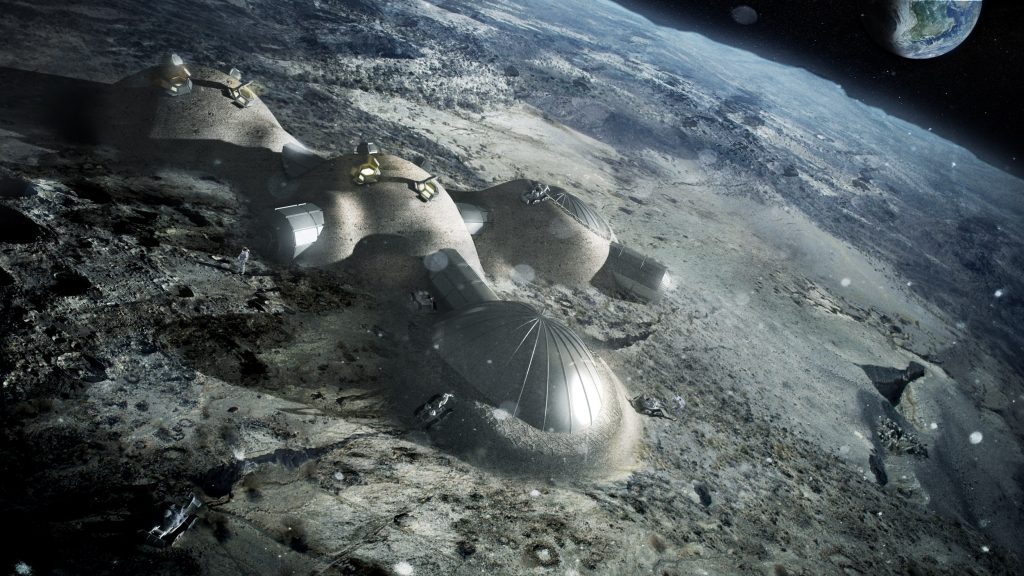 What will those technologies be?

Different techniques are being studied. One of them involves heating the material in order to extract it through thermal processes. You can also use fuel cells, like when we use hydrogen to produce electricity. We’re also looking at the possibility of using waves, as if we were putting the lunar soil in a microwave, to crack it and thereby get construction material. Last, we’re studying the possibility of using 3D printing, using the regolith as a raw material to print bricks for building structures on the moon. Each approach is being studied by a specific team, and we don’t know yet which will be most effective.

It’s not likely, though, that it’ll have any use on Earth. The cost of transport to bring the materials back would be unimaginable. People dream of mining asteroids to bring back platinum or precious metals we need for electronic equipment but are very rare on Earth. But for now, that doesn’t seem economically viable due to the costs of transport. Our goal is to settle sustainably on the moon, not to bring minerals back to Earth.

How would the work be organized on the moon’s surface?

We’ll have to move a whole lot of regolith. To gather it and transform it, we’ll need robots. That could take weeks, months, even years before a facility is ready. That way, when humans do arrive, the moon will already be habitable. 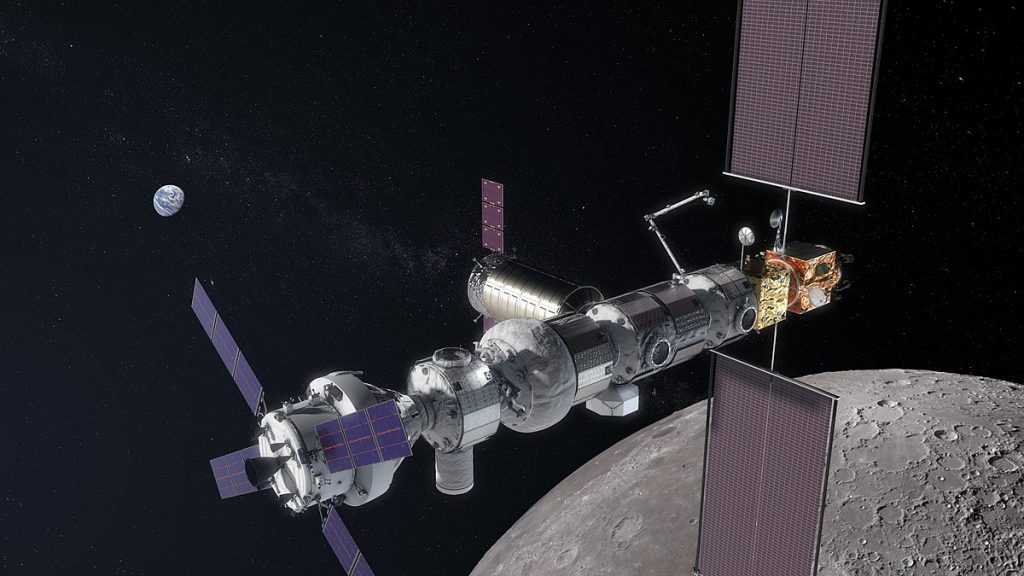 We’re already working on the next steps of exploration: we’re preparing the rockets and space vehicles of tomorrow. The ESA is contributing to the design of the Ariane vehicle that will transport the astronauts to the moon. The idea is to first build a pole, an orbiting base camp called Lunar Gateway (the Lunar Station), whose construction will begin in the first five years of the coming decade, between 2020 and 2025. We’ll then be able to begin robotics work, controlled by astronauts orbiting above the moon.

The return of human beings on the moon will come in 2030. From there it’s a question of financing, in order to go from science to practical engineering. That’s where the European Exploration Envelope Programme (E3P) comes in. This envelope includes our work on space stations, anything concerning our robotics mission and the construction of the Lunar Gateway. We want to send the first European astronaut to the moon, and we also want to establish a robotics mission on Mars to drill under its surface, starting in 2020.

How much will all these missions cost?

There are about 500 million people in the European Union. The ESA costs each person about one euro per year, and to do what we want to do, we’d like to add an extra 20 cents per year to that bill. That’s the kind of budget we’re talking: we need about 600-700 million euros per year. And I sincerely hope we can get it. 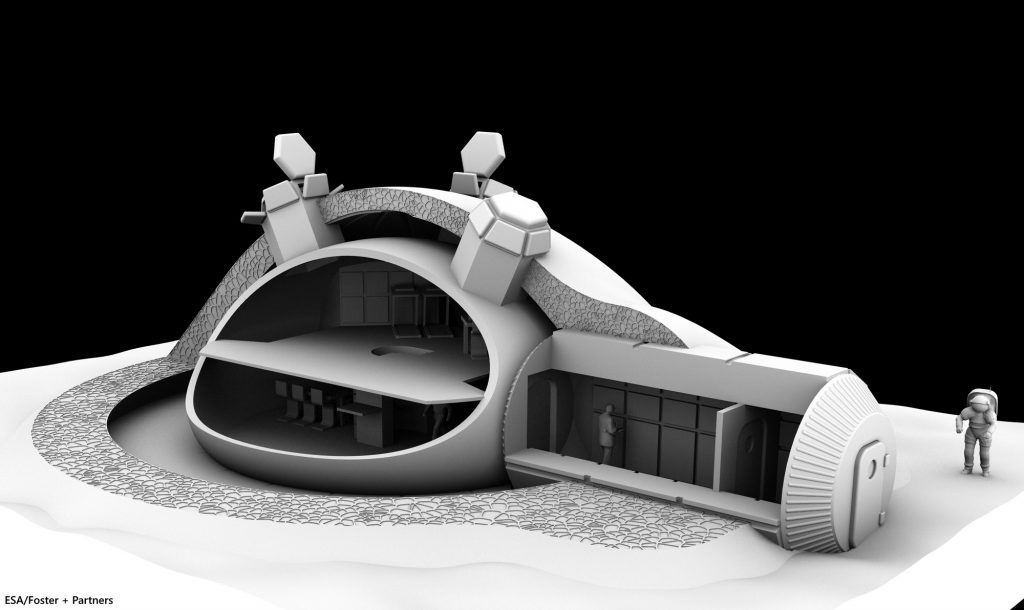 Yes, we can talk about lunar igloo
Credits: ESA/Foster + Partners

When you realize that NASA spends $50 million a week on its exploration program, we owe it to ourselves to make this effort. Especially since we have such excellent returns on investments, in terms of scientific discoveries and new technologies. All the money we’re spending stays on Earth and helps our European industries, our universities. Robotics, artificial intelligence, energy systems: we’re making concrete progress in our European technologies. Space exploration is a good way to involve Europe in international projects and to inspire future generations. We can only see benefits coming from these missions.

Is there a real collaboration between countries and space agencies?

Certainly, everything depends on that. This year, we’re going to send the Italian astronaut Luca Parmitano to the International Space Station on board a Russian rocket, with American and Russian astronauts. This international collaboration is important, even if it takes complicated political negotiations. Everything we do is part of an international collaboration: we’re working with Americans, Canadians, Japanese, Russians, Chinese, etc. There’s so much to do that we can all contribute. In the 1960s we had a space race between the United States and the Soviet Union, but nowadays there’s a collaboration at all levels.

How will resources be distributed among countries?

In the current state of international law, it’s impossible to own the moon or its resources. Nobody can say, “This part belongs to me.” It’s a common planetary good. It’s kind of like international waters: you can’t own them. However, on Earth, there are agreements that authorize you to extract resources from the oceans, so long as it follows a long-term, sustainable vision. That’s one of the main challenges of the future, and several highly competent lawyers are starting to reflect on these issues, as is the United Nations. 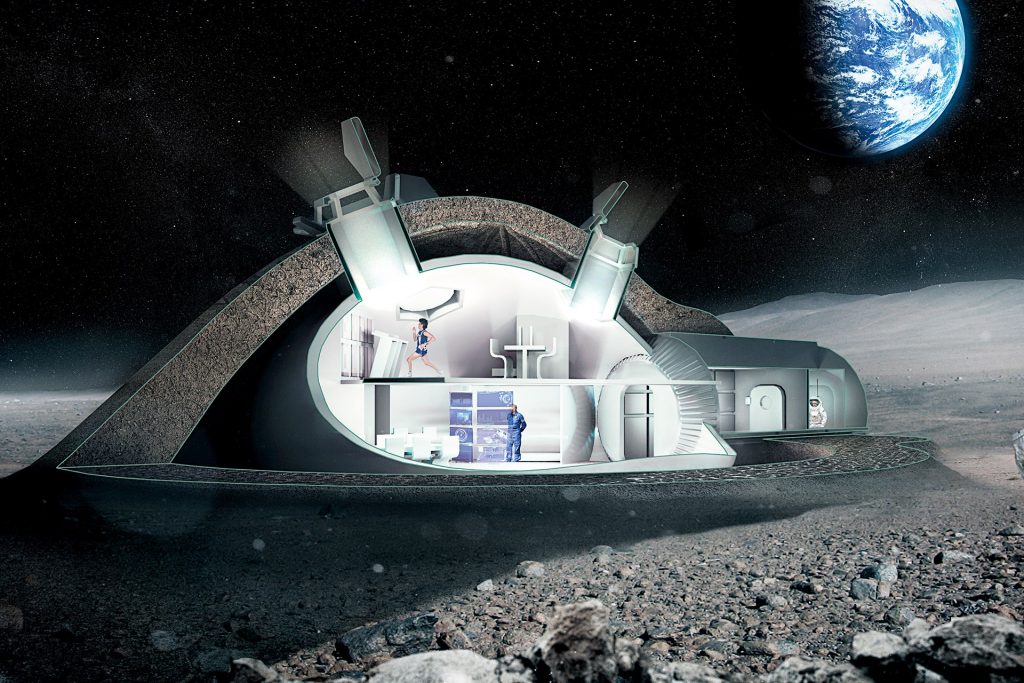 How will you make the moon habitable?

First we need to bring our human explorers oxygen, water and food. Moon landing then requires a complex engineering process, with proportion and guidance control systems to ensure that it’s secure. Moon dust, regolith, represents a real obstacle for machines, but also for people. The particles are incredible fine and very, very sharp, which causes a significant threat to devices’ mechanisms. In designing them, we need to take into account this hostile environment. We also need to protect people to prevent the dust from getting into their lungs, which could cause health problems.

Because of the way the moon revolves around the Earth, which itself orbits the sun, a lunar day lasts 14 Earth days, as does a night. When it’s dark, the moon becomes extremely cold, which poses a significant challenge to people and machines. Nobody has seen it so far, even if China managed to make the first moon landing on the far side of the moon in January.

It’s also an environment with a high amount of radiation emitted by the sun and the stars. People would need to be protected, and that’s one of the possible uses of regolith: we could bury our lunar base in it to protect ourselves.

Would life on the moon be mostly underground?

In the long term, that would be the most likely solution, yes. We’ll build thin metallic structures to provide a hermetic environment that will bury us underground. The regolith will be piled on top of our buildings, sort of like an igloo, in order to protect us from radiation.

Will we be seeing tourist hubs on the moon any time soon?

We don’t see tourists going to the moon in the next 10 years. SpaceX is talking about building really big rockets, but that only addresses the first part of the problem. In a few years, maybe really rich tourists could go around the moon. But I think you’ll have to wait until 2030 before you and I will be able to buy a ticket to visit it, or to settle there permanently. It’s definitely coming, though; we’re extremely good at solving problems!

At the heart of Microsoft’s Crime Unit

E-residence: will the Estonian digital residence inspire the world?

How Ethiopia has risen to the forefront of African innovation

How Tokyo Became the Megalopolis of the Future